The schedule for the SHS Trap Team has been set.  Please click on the 2020 Schedule button above to see the full schedule.  NOTE that registration for the team will open on February 3rd.  There is a $35.00 registration fee per athlete.  Registrations will close March 23rd and no registrations will be accepted after that date.  March 29th will be the first practice week for this year.  The first competition will be held April 19th.  All practices and competition weeks will start at 4:00 P.M.

Please note that the Fun Shoot held on June 7th will be starting at 1:00 P.M. That is the only date that shooting will start at the earlier time.

Additional information regarding Lettering for the SHS Team, Safety Information and a printable schedule is available HERE

We would like to thank Saegertown Area Sportsmen Club for being our sponsor club.    The weekly shoot results will be available on the Results page  link above once the season starts. 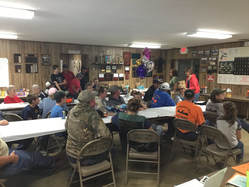 The activities included a 50 target 16 Yard Prize shoot that won Dave Shouey the High Gun prize of $50 when he put together a perfect 50 score.  Many other prizes were won by the other shooters.  These are listed below.  Other activities included the opportunity to shoot either or both Wobbles targets with their many different flight paths and Annie Oakley shoots.  Unfortunately some of these extras opportunities suffered when the trap machine on Field Three threw a tantrum and started launching birds on its own.  This problem did disrupt the smooth flow and called for some quick modifications of the shooting arrangements to best serve the needs of all the shooters. 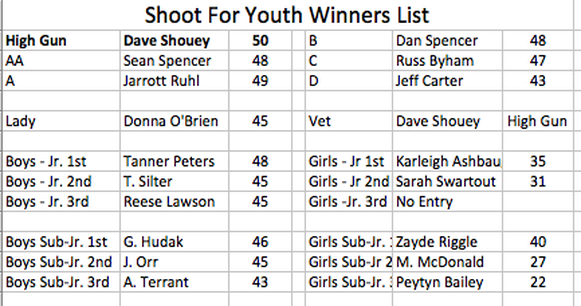 3rd in State for Saegertown High School Trap League
by Darin Ashbaugh (Head Coach)
A summary of the 2017 season.
Guns, shooting, a high school sport?  Yes, thanks to Dave Birchard and Russ Dempsey. Talking to Russ last fall about trap shooting being a school sport, I had my doubts too. After hours of research, phone calls, and getting it approved by the PENNCREST School Board, they made it happen! The Pennsylvania State High School Clay Target League has grown by more than 500% in numbers and is quickly becoming the fastest growing and safest high school sport in Pennsylvania and the nation.  The league’s priorities are safety, fun, and marksmanship, in that order.

The Saegertown High School Trap School team consists of 28 athletes. Our season began in March lasting 9 weeks, 5 weeks of competition. 13 members of the team competed in the State Tournament on June 4, 2017 in Clairton, PA. Pulling in and seeing 8 trap fields and 169 other athletes was a bit overwhelming. Most of these kids have never had head to head competition quite like this.  You have to be in the right mind set and “in the zone”. They need to be able to stay there, by blocking out the noise, the discussions about the wind conditions, and just focus on the targets. The athletes also had to regain their composure when the birds came out broken, which happened over 30 plus times.  This really worked on our shooters nerves, having to recall for a bird. This is when the mental skills of the game really kick in. Under the conditions, 3rd place was a great team accomplishment. We had some very impressive individual scores that helped us earn the title.  The scores were based on 100 points, 1 point per bird shot, broken down into 4 rounds of 25. Sarah Swartout and William Lilly both shot scores of 83. Sarah clinched 2 metals, State Competition High Gun Varsity Female – 3rd place and 2nd place for Season Female High Gun Average. Dustin Hunter received a 3rd place metal for High Gun State Competition Junior Varsity – Male.  Charlie Johnson shot a strong 88. Seth Lang and Ben Rockwell scored a pair of solid 90s. Tanner Peters led the Panthers with an impressive 94 (21,24,24, and a perfect round of 25!).

Congratulations to our Saegertown High Trapshooters.  They did good at the 2017 State Championships.  As a team they came in Third Place of the eleven teams competing.  Sara Swartout came home a double medal winner and Dustin Hunter won one metal at the State Shoot held in Clariton.

Here is a picture taken at the shoot of just some of the many young shooters who made this State Shoot such a success.  Congratulations to all the young shooters.  (posted June 7th)
The SHS Trapshooting team is part of the Pennsylvania State High School Clay Target League.  Learn more about the statewide organization by clicking HERE.
The twenty-nine member strong Saegertown High School Trapshooting Team held its very first practice session ever April 2, 2017.  They are now a part of the state wide Pennsylvania State High School Clay Target League.  All of the young men and women had a safety and orientation session a few days earlier.  In that session, under the direction of Head Coach Darin Ashbaugh, the shooters, who are required to have successfully completed the Pennsylvania Hunter Safety Education course prior to joining the SHS team, learned the safe handling of firearms, basic trapshooting procedures and etiquette, proper handling of ammunition and the use of safety equipment to protect their eyes and hearing.  Today, April 2nd, was the day, under the direct supervision of the coaching staff, they got to put that classroom training to use.  It was an exciting day for these ladies and gentlemen as they gave their best efforts to breaking those elusive flying clay discs.  The weather was great and the excitement level was fantastic!

The program is made possible with the help of many local and national sponsors.  The Saegertown Area Sportsmen Club provides not only the trap facilities, ammunition and many of the clay pigeons used in the program,  but also two loaner shotguns for those who may not own a suitable shotgun of their own, .  Other sponsors include the Friends of the NRA who are providing  additional ammo, and funding from Meadville Elks Lodge #219, Finck Tire, the Rocky Mountain Elk Foundation, Veterans of Foreign Wars #205, American Legion Post #381, Northwestern REC, Imperial carbide, Shorts Tool, Meyer's Sportsmen Connection, Area Tool & Manufacturing and Walker Brothers.  Thank you to all of our sponsors.

Here are a few pictures from today's activities.
Powered by